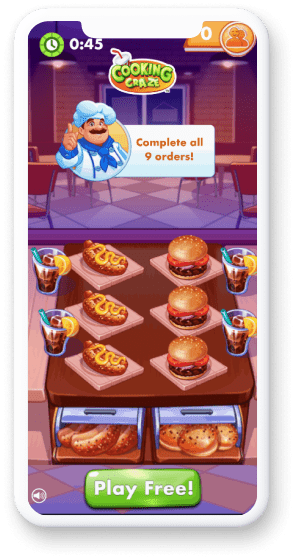 Since 2002 Big Fish Games has innovated, developed and published an extensive portfolio of popular casual games across genres. Well known for its popular games Gummy Drop!, Cooking Craze, Fairway Solitaire and EverMerge, Big Fish delights millions of players every day all over the world.

LifeStreet’s LAT campaign offered us a way to scale efficiently on inventory that was less competitive at the time. Its deep learning model custom-built for Cooking Craze-used contextual signals to predict exactly what type of users were the best match for our game and most likely to make an in-app purchase. We’ve been partnering with LifeStreet for eight years and it’s great to have the level of trust where you can try something new, confidently.

LifeStreet suggested that Big Fish look for new players among a pool of users they were currently not buying–those who had selected LAT (Limited Ad Tracking) in their privacy settings. LifeStreet had seen successes running LAT campaigns with other advertisers and knew that because there was less demand for these users, their attention would be easier to engage.

Because LifeStreet is one of Big Fish’s longest standing and most trusted partners, the game developer was willing to expand with the help of LifeStreet their user acquisition efforts beyond IDFA (Identifier for Advertiser) traffic. They were confident that LifeStreet’s custom modeling platform had the training needed to immediately start optimizing bids based on the likelihood that a LAT user would convert. This removed any guesswork that could have resulted in wasted spend.

To find  the scale needed for this campaign, LifeStreet partnered with a few trusted mobile exchange partners, including MoPub. MoPub, a division of Twitter, is the leading mobile programmatic exchange exclusive to in-app. MoPub and LifeStreet have had a long-standing track record of successful campaigns and LifeStreet knew that MoPub’s scale across LAT users would help them hit Big Fish’s campaign goals.

By working with MoPub as a supply source, LifeStreet was able to scale the LAT campaign while maintaining quality users; helping Cooking Craze hit key KPIs. Of all exchange partners for the campaign:

By working with LifeStreet, we have been able to test which app targeting signals allow LifeStreet to bid more effectively across LAT-enabled audiences. The successful promotion of the viral app Cooking Craze is just one example of how developers have utilized LifeStreet's bidding expertise, in partnership with Twitter's MoPub in-app exchange, to prove that LAT audiences can perform even better than users acquired through the use of IDFA.