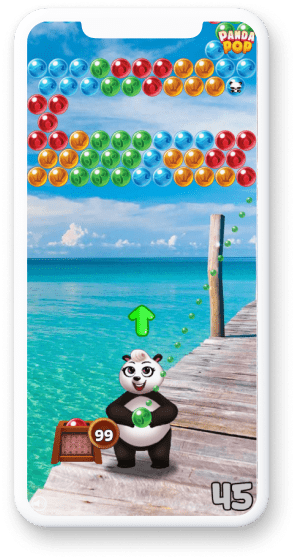 Jam City is a mobile gaming powerhouse with a portfolio that includes match-3, role-playing, and narrative-rich experiences. Cookie Jam and Panda Pop are among their highest-grossing and longest-running titles which are played by tens of millions of monthly users across 40+ countries.

“The team at LifeStreet always comes to the table with a clear strategy for integrating new data sources, is always transparent, and consistently returns results. So when they proposed running a LAT campaign we didn’t have to think twice about trying something new because the trust and transparency was already there.”

In 2014 LifeStreet launched its first Panda Pop campaign which ran on a CPI (cost per install) with no post-install data to optimize towards. Even though the campaign hit Jam City’s goals for return on ad spend (ROAS), LifeStreet knew that with revenue visibility they could improve targeting and campaign performance. Jam City agreed to share Panda Pop’s attributed revenue data which allowed LifeStreet to optimize towards ROAS and exceed D7 and D30 benchmarks.

Recently, however, it seemed that the campaign’s upward trajectory may have hit an inflection point. That’s when LifeStreet suggested to Jam City that they look for new Panda Pop users among LAT (Limited Ad Tracking) traffic — an audience segment that had been contractually excluded up to that point.

Because LifeStreet had always offered complete visibility into a campaign’s ad placement, pricing, and data, Jam City agreed to allocate a small portion of its overall budget to LAT traffic. Additionally, LifeStreet predicted they would be able to quickly hit Jam City’s D7 ROAS goals across LAT traffic by applying the same bidding model used for can-track campaigns.

The LAT campaign immediately exceeded D7 ROAS goals and performance has been consistently strong ever since the campaign launched in March.